DISCLAIMER: THIS INFORMATION IS EXTREMELY OUT OF DATE.

Ceilometer is a fairly new component of OpenStack, so I thought it would be helpful to document how I install Ceilometer and DevStack. Ceilometer monitors and gathers data on other components in OpenStack. For example, one could use Ceilometer to measure CPU usage in order to bill customers.

In this post, I'll go through how I install Devstack and Ceilometer on a Vagrant virtual machine running 64-bit Ubuntu 12.04 LTS. Your host machine should have enough memory, so that it can run a virtual machine with 2 GB RAM.

Before getting into details, some disclaimers and explanations.

Finally, note the date of this post. Devstack and Ceilometer are rapidly being developed, and this information could become deprecated very quickly.

I'm running 64-bit Ubuntu 12.04 and here's what I did. First, I added the following line to my etc/apt/sources.list file:

Then I downloaded and added the Oracle public key using

I checked that I had the correct key by examining its fingerprint:

Finally, I installed VirtualBox by running the commands:

Download the latest version at the Vagrant downloads page, as of this writing, v1.2.7. (The version at the Ubuntu repository is a bit behind the latest.) Then install it using your package manager. On 64-bit Ubuntu 12.04, I ran these commands to install Vagrant:

Next, create a directory where you will manage your Vagrant virtual machine (VM), for example,

Now you need to pick a "box." Vagrant uses "boxes" as the base image for creating a virtual environment. A box is based on a specific operating system possibly with additional software and configurations. Vagrant has official bare-bones Ubuntu boxes, and there are also many other unofficial boxes at the community page located at www.vagrantbox.es.

I recommend sticking to the official boxes. Devstack officially supports Ubuntu 12.04, so install the 64-bit Ubuntu 12.04 box for VirtualBox:

(Yes, it's confusing that both my host machine and my Vagrant VM are running 64-bit Ubuntu 12.04 ! Your configuration may differ.)

A 64-bit OS is preferred, so that you can assign more RAM to your VM. Note that since we are running a 64-bit guest machine on VirtualBox, you need to make sure that hardware virtualization is enabled on your host machine. This may require you to access your machine's BIOS settings.

Create a Vagrantfile using the commands

We are going to setup port forwarding and increase the RAM by altering the Vagrantfile. Open the Vagrantfile in your favorite text editor and see if there are any lines matching

If you find the matching lines, uncomment the last line so that you have

If you don't have the matching lines, then manually copy and paste the above line to the Vagrantfile.

We are using port 8080, but you can use another port, as long as it isn't being used by another process. We will need port forwarding later to check that Devstack is working properly.

The recommended amount of RAM for Devstack is at least 2 GB. However, the default RAM in a Vagrant VM is 360 MB, so we need to change this.

Add the following lines to the Vagrantfile:

My laptop I work on has 8 GB RAM, and it works fine running a 2 GB Vagrant/VirtualBox VM.

Here is a sample Vagrantfile that configures both port forwarding and 2 GB RAM.

Boot up the Vagrant VM

We are ready to install Devstack and Ceilometer. First, create the virtual environment and boot the virtual machine by running the commands

Now you can SSH into the machine via

Check that your virtual machine has 2 GB RAM:

If you see a different number, check your Vagrantfile.

Now that you are logged into your Vagrant VM, the first thing to do is download and update the package lists from the Ubuntu repositories:

Next, install git and your favorite terminal text editor, for example,

then copy the sample localrc to the top-level of the devstack repository:

This file localrc allows you to configure user-defined variables in the stack.sh script which installs Devstack.

(If you previously installed Devstack using the stack.sh script, you can start the installation process for Ceilometer here. The only difference is that you won't see the prompt for an admin password.)

Ceilometer is not enabled by default, so add the following to the end of your localrc file:

Now you are ready to install Devstack and Ceilometer! This is a CPU intensive process, so don't run any heavy programs in the background.

Run the script to do the installation:

Input a password as directed and sit back as everything is installed for you. It took about 30 minutes to install on my own VM.

The Ceilometer GitHub repository will be cloned to your /opt/stack/ceilometer directory.

I already installed Devstack, but not Ceilometer

If for whatever reason you already installed Devstack but have not yet installed Ceilometer, no problem. You don't have to create a new VM. Skip down to the part in the instructions where it says you should begin if you previously installed Devstack.

4. Check that Devstack is working

On your host machine (not the VM), open up your browser and point it to the forwarded port. If it was 8080, you would use http://localhost:8080/. You should see the OpenStack dashboard page with a login form: 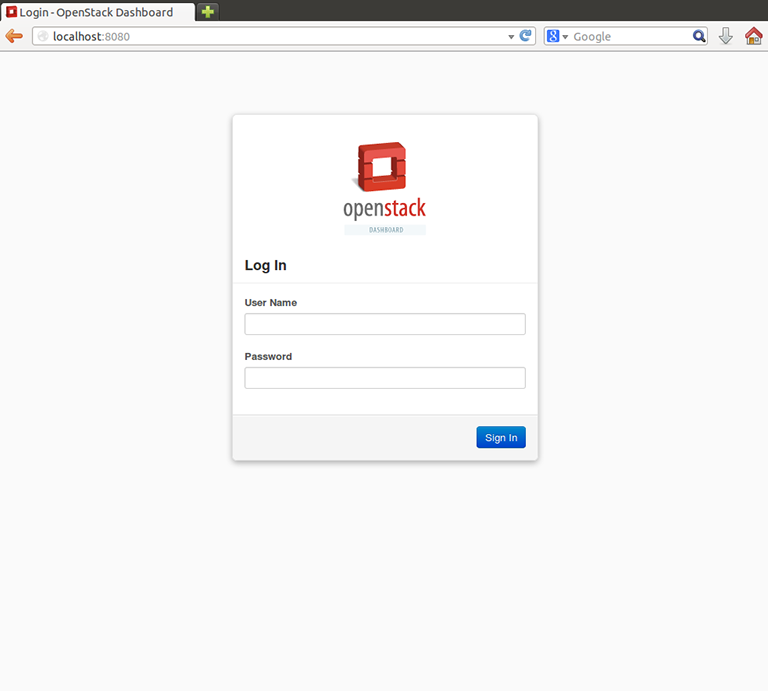 To login, provide the username admin and the corresponding password which can be found in the ADMIN_PASSWORD variable of your localrc file. 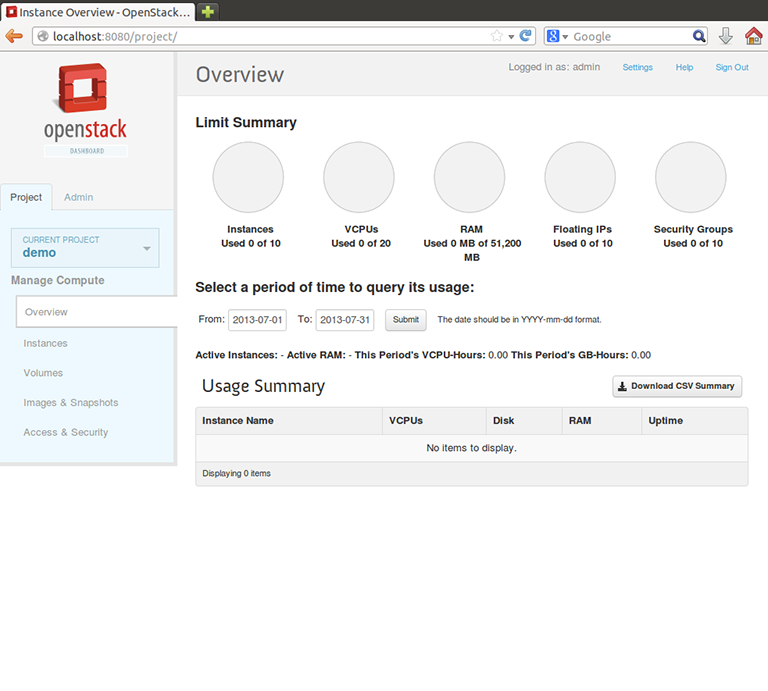 If you go to the system info page at http://localhost:8080/admin/info/, you should be able to see all the enabled services: 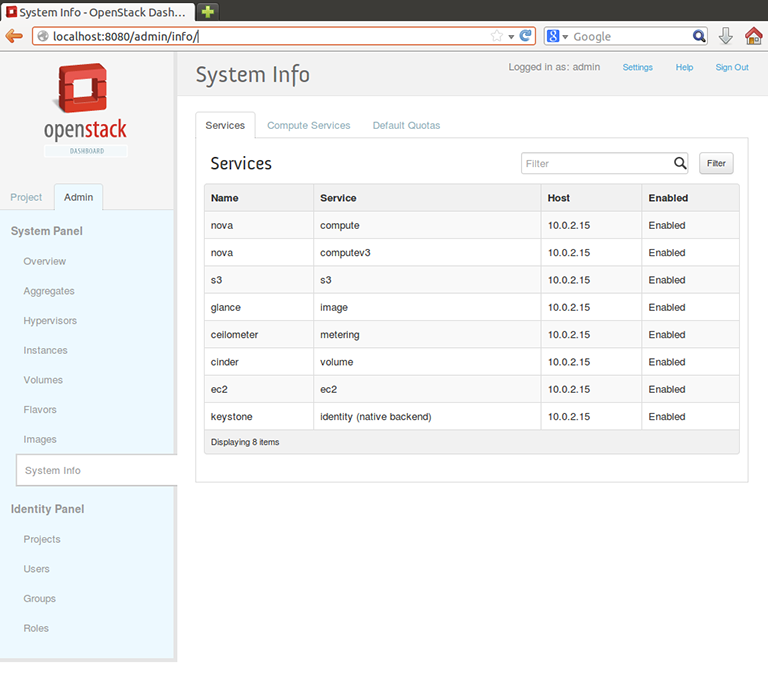 We want to enable auditing events for Nova and Cinder, so that Ceilometer can collect data from them. As stated in the Ceilometer documentation, do the following. First, check to see if the Nova configuration file /etc/nova/nova.conf contains a line:

If the line does not exist, add it to the file.

Second, add this line to the end of the Cinder configuration file /etc/cinder/cinder.conf:

if it doesn't already exist.

6. Check that Ceilometer is collecting data

We can check that Ceilometer is collecting data by starting up the MongoDB shell, connecting to the Ceilometer database, and examining the data.

First, start up the MongoDB shell and connect to the Ceilometer database by running

which should produce the output

and leave you at the prompt.

Ask for the number of samples that have been collected:

You should get a number greater than 0; I got 19 samples. As time goes on, the number will increase.

The command db.meter.findOne() should return the information for one sample, for example,

Running the command show collections lists all the other MongoDB collections you can look at, for example,

The Ceilometer documentation glossary defines some of these terms "meter", "project", "resource", "user".

which on my VM gave the output

These indexes speed up searching and sorting on MongoDB data.

Type exit to leave the MongoDB shell and return to bash.

The Ceilometer documentation explains how to setup and run unit tests. First, install the package tox:

Then install the test dependencies:

This will take at least a few minutes to run. If the dependencies were installed correctly, you should get a message that looks similar to

Run the entire test suite in Python 2.7 and check for PEP8 style errors:

If everything runs correctly, you will get a message similar to

The OpenStack dashboard is working, Ceilometer is collecting samples, and the unit tests pass. Congratulations! You have a working Devstack and Ceilometer!

You can also run just the Python 2.7 tests

or just the PEP8 tests

If you don't need to run the whole test suite, you can run a group of tests. To run the Python 2.7 tests in the tests/storage directory of the Ceilometer code, you would execute

If you want to run just a single test from tests/storage, you need to use the entire file path:

When you are running tests in testr by path, be careful if your specified path is a substring of other paths. For example, if you run the test test_get_meters using the command

I've mentioned some references to documentation along the way, here's a summarized list of them, plus a couple more.